“We miss you and we will forever keep your legacy going,” DJ Khaled wrote on Twitter

DJ Khaled is honoring slain rapper Nipsey Hussle with the release of their joint track “Higher.”

Khaled, 43, made the announcement on Twitter on Wednesday, explaining the song’s proceeds will go to Nipsey’s children — son Kross, 2½, with girlfriend Lauren London and daughter Emani, 10, from a previous relationship.

“Recently, I embarked on a soul-searching journey down a road I never thought I would travel in a million years. It began when a tragedy robbed the world of an enlightened soul, a brother, a father, a partner and my friend Nipsey Hussle,” Khaled began.

The hit maker went on to reveal that just days before Nipsey was gunned down in front of his Los Angeles clothing store on March 31, “he shared his energy and positivity with me on a video set for a song called, ‘Higher.’”

“After much prayer and reflection; and with the full blessing of the Asghedom family, I am sharing that with the world,” Khaled continued.

“The very title of the song reminds us that vibrating on a ‘Higher’ level was the essence of Nipsey’s soul,” the music producer added. “It is in this spirit, of moving forward, of preserving his mission that I, my co-writers, producers and label partners are donating 100% of all of our proceeds from ‘Higher’ to Nipsey’s children, Emani and Kross.” 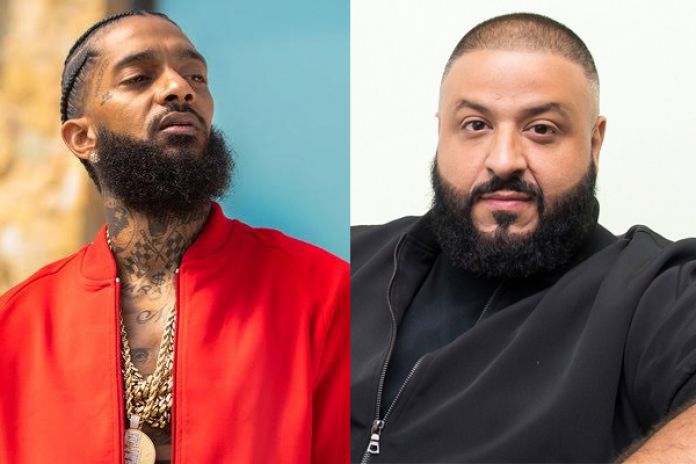 “The Marathon Continues,” Khaled, whose upcoming album Father of Asahd will be released on Friday, added.

Along with the tweet, Khaled wrote, “A gift from my brother Nipsey we want to share with the world. We miss you and we will forever keep your legacy going.”

The sweet news comes just a few days after it was revealed that Nipsey’s sister Samantha Smith had filed a petition to become Emani’s legal guardian.

Smith lived with her brother, whose real name was Ermias Asghedom, and Emani until about 2014 or 2015, but kept up “consistent and frequent contact” with her niece on a weekly basis in the years since, according to documents obtained by PEOPLE. “[Smith] has always been a presence in Emani’s life and along with the rest of Emani’s paternal family has assisted in her care and continues to do so,” the documents read.

Her goal of obtaining custody of the girl is to “ensure [her] continued stability” and guarantee Emani “can continue to live with family members with whom she has always had close ties.”

The documents were also signed by Nipsey’s father Dawit Asghedom.

Emani’s mother Tanisha Foster did not immediately respond to the filing.

Sources told TMZ that the rapper cared for his daughter before he was shot and killed.

London previously spoke about Nipsey’s love for his family at his emotional memorial, which was held at the Staples Center.

“My pain is from a 2-year-old that probably won’t remember how much his dad loved him,” she said. “His soul was majestic. He was the strongest man that I ever knew. A gentle father, a patient leader, a divine light. He was brilliant. He researched everything, completely self-taught, constantly seeking knowledge,” London said.

On Wednesday, London paid tribute to Nipsey on Instagram, writing, “King of Los Angeles. Then. Now. Forever,” alongside a photo of him sitting at the foot of stairs.

Hussle died from gunshot wounds to both the head and torso, the Los Angeles County Department of Medical Examiner-Coroner confirmed. “Paramedics were called and [Hussle who was born Ermias Joseph Asghedom] was taken to the hospital where he was pronounced dead at 3:55 p.m.,” the coroner said in a statement obtained by PEOPLE. Eric Holder was charged in early April with one count of murder, two counts of attempted murder and one count of possession of a firearm by a felon.

He entered a plea of not guilty in court on April 4 and could face a maximum sentence of life in state prison if convicted.

Last week, Attorney Chris Darden, who was famously part of the prosecution team in the O.J. Simpson trial announced he was withdrawing from Nipsey’s murder case after receiving threats against himself and his family. Darden, 63, had been hired by Holder.

“You guys have been awfully good to me and my family,” Darden wrote on Facebook. “Thank you. I am on my way to appear for the last time in People v. Holder. I filed a Motion to Withdraw from the case.”

“I cannot understand why in 2019 some people would deny a black man his 6th Amendment right to counsel of his choice,” he added. “Or why defending such a man should invite threats not only against me but against my children too.”

thanks for reading it out..

Previous Nipsey Hussle tribute by Lauren London on late rapper’s birthday: ‘His purpose still lives’
Next Michael Jackson’s Fans Were Angry After What Chris Tucker Says MJ’s Accuser Did Him Too