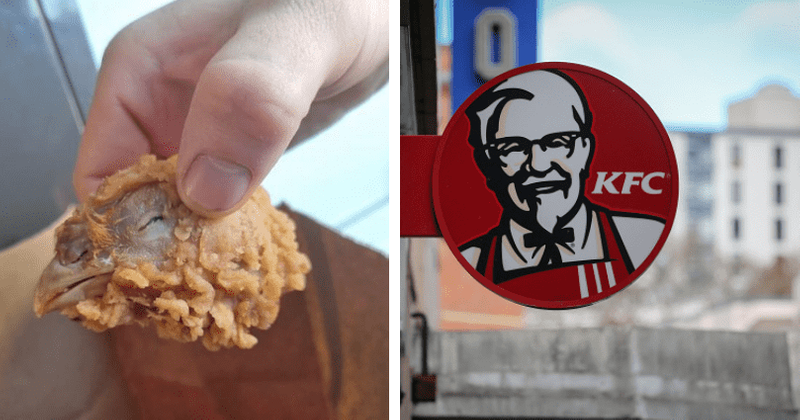 The image, which was also published on Takeawaytrauma’s Instagram and Twitter accounts, featured the fried chicken’s head, complete with beaks and closed eyes covered in batter. The reviewer, identified as Gabrielle from the UK, rated KFC two stars on JustEat and said: “I found a fried chicken head in my hot wings meal. Put me off the rest of my meal, urgh.” The takeaway was from KFC Feltham in Twickenham, England

Instagran handle @takeawaytrauma uploaded a photo of the fried head on Tuesday that received over 9,000 likes, and social media users were quick to mock it.

“What does it take to get one star?” wrote one user. “Fried chicken head is still fried chicken in all fairness,” added another. Others said that seeing the animal’s head helped them to be more conscious of what they were consuming. “If you eat meat there’s nothing to complain about you’re just faced with the reality of what you’re eating for once. Another concurred, “If you can’t handle that your food is a dead animal then you shouldn’t be eating meat.”

KFC joked that it was “the most generous two-star review ever” on Twitter, saying they were “baffled” as to how the entire head had gotten in the meal. They also added, “We were genuinely surprised by this photo. Since Gabrielle got in touch, we’ve been looking into how it happened.”

“Put simply, we serve real chicken – and we’re proud of that – but this has clearly slipped through the strict processes and checks in place with our suppliers, partners and teams, who freshly prepare everything in our restaurants. It’s true that even the best-laid plans can on rare occasions go awry. And this is an incredibly rare one. It’s one we’ve taken incredibly seriously – already putting further measures in place without suppliers as well as retraining our teams to prevent it from happening again.

That said, it doesn’t change Gabrielle’s experience – so we’ve reached out to her and she’s now accepted some free KFC on us,” KFC told The Sun. They went on to say that she and her family had been brought into the restaurant to view how the food was prepared and that there would be no more chicken heads in her hot wings.

Previous Texas Man Divorce’d Wife Without her Knowledge by Forging her Signature on the Paperwork
Next J. Alphonse Calls Out Plies For Knowing Every Character on P. Valley & Every Line, But Claims He Can’t